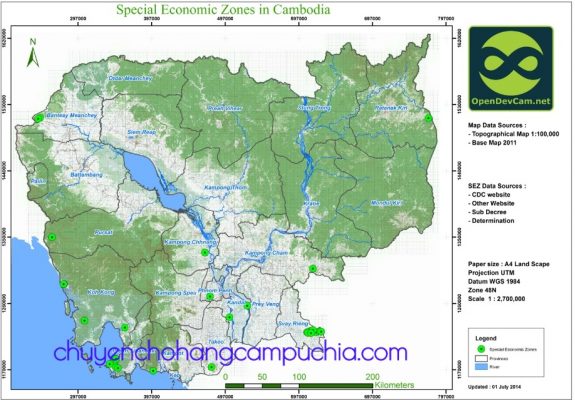 Since the 1960s, Special Economic Zones (SEZ). Also known as free trade or export processing zone. Depending on the details of their regulations, has grown rapidly in Asia; Latin America; Caribbean and Africa.
A general feature of all these areas is the import duty-free of intermediate goods. Supply production outputs that are completely exported.

The legal framework for Special Economic Zones (SEZ) in Cambodia was established by a government subdivision issued in late 2005. In 2014, nine such areas operated in the country, listed. in Table 2 (Table 2), with 20 other areas allowed to start operations. SEZ zones are still relatively small.
The total number of jobs in Cambodian special economic zones is currently around 68,000. The Manhattan SEZ in Bavet is the largest single SEZ, with a total of 28,000 jobs, while the other two SEZs in Bavet (Taiseng SEZ, Shandong SEZ) use an additional 8,000. The Phnom Penh SEZ area employs 17,000 workers, the Shanoukville three SEZ areas employ fewer than 10,000.
Economic areas on the Thai border of Koh Kong and Poi Pet use less than 5,000, so SEZs represent less than 1% of total employment and 3.7% of total secondary jobs in Cambodia (Table 3) For comparison, Cambodia’s garment industry, largely outside the SEZ, is reported to account for about 600,000 employees, accounting for about 38% of the total number of secondary jobs, or 10 times all SEZs. combined
Implementing the economic development quadrilateral strategy of the Royal Government of Cambodia. Up to now, the Cambodian Government has allowed the establishment of 19 special economic zones. These economic zones have been given many preferential policies by the Government and increasingly attract foreign investors to invest in producing goods for export to foreign countries.

3. EXPORT AND IMPORT CARGO IN TO CAMBODIA SEZ

Have a chat with us